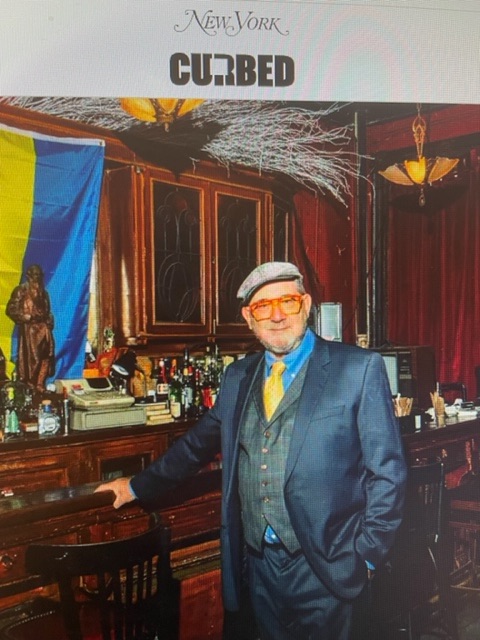 When Denis Woychuk was growing up in Flatbush in the late 1950s and ’60s, he often took trips into the city with his father. His dad immigrated to the U.S. from Ukraine in 1929, and in the Ukrainian Village he didn’t even have to try to speak English. Often, they would stop by 85 E. 4th Street, which was then the Ukrainian Labor Home, a kind of socialist social club. The Ukrainian Daily News was headquartered there, Soviet propaganda films were shown, and plenty of vodka was poured at the bar. Woychuk inadvertently had his own first drink here at just 5 years old, after a bartender decided it would be funny to serve him. In 1993, after he was well past the legal drinking age, Woychuk bought the building and opened the Kraine Gallery (that’s short for Ukraine) and KGB Bar.

The bar looks much the same today as when it first opened — decorated with Soviet-era posters, communist flags, and Art Deco structures left behind by the Ukrainian Labor Home — and for decades has been famous for its readings and other literary events. But if KGB has largely remained the same, the rest of the Ukrainian Village has not. Woychuk lives in the neighborhood too, and over the years he has seen rents skyrocket, old businesses close, and new ones open.

Inside look at KGB Bar, a vestige of the East Village literary scene

East 4th Street and its Political Past

A Home for Writers & Rebels: Profile of Denis Woychuk